Skip to content
This post may contain affiliate links for products I recommend. If you click a link and buy something I may receive some compensation. This does not change the price you would pay.

If you are in need of heavy duty kitchen shears then this is the site for you.  We have taken a look at the top rated brands, found the features that customers really love and also what they don’t like.

Heavy duty kitchen shears are designed to make your life much easier in the kitchen.

You can cut pretty much anything related to cooking – parchment paper, fish, leaves, pizza – the list is unlimited.

Household scissors have long blades, where heavy duty kitchen shears have a shorter blade and longer handle to give you greater leverage when cutting through foods.

A couple other differences are that the blade of a kitchen shear is typically curved and the blades come apart for cleaning.  It’s very important to be able to take the blades apart to wash them properly so that you don’t contaminate other foods after using them on chicken and other meats.  You can wash them by hand or throw them in the dishwasher.

Kitchen shears are an amazing tool in the kitchen and once you have used a good pair, you will find that you can’t cook without them and you’ll be using them for everything!

If you are in a rush…

What Are Kitchen Shears Used For?

If you cut bacon with a knife, you are going to love how easy it is to cut bacon with kitchen shears!  It’s easy, quick and so efficient.  No mess either.  The shears don’t slip around on the greasy bacon.

For Cutting Chicken and Chicken Bones

Most people think that heavy duty kitchen shears are only for cutting chickens and chicken bones although they are good for so much more!  But why are they so good for chicken?  Well, for two big reasons:

And… you can take them apart for cleaning.

Who would have thought that you would use scissors for baking?!  Heavy duty kitchen shears are really the answers, not scissors.  They are great for cutting dried fruits for breads and muffins, great for cutting marshmallows,   I also use it to cut up cubes of cold butter for my pie crust recipe.

Kitchen shears are great for cutting pizza, flat bread, pitas, quesadillas etc.  I also use them to cut bread into cubes for bread pudding or croutons.

For Fruit and Vegetables

I find that the fastest way to cut up peppers is with kitchen shears!  I cut up all sorts of fruit and vegetables with my shears.  In addition, they are great for cutting up dried fruits. 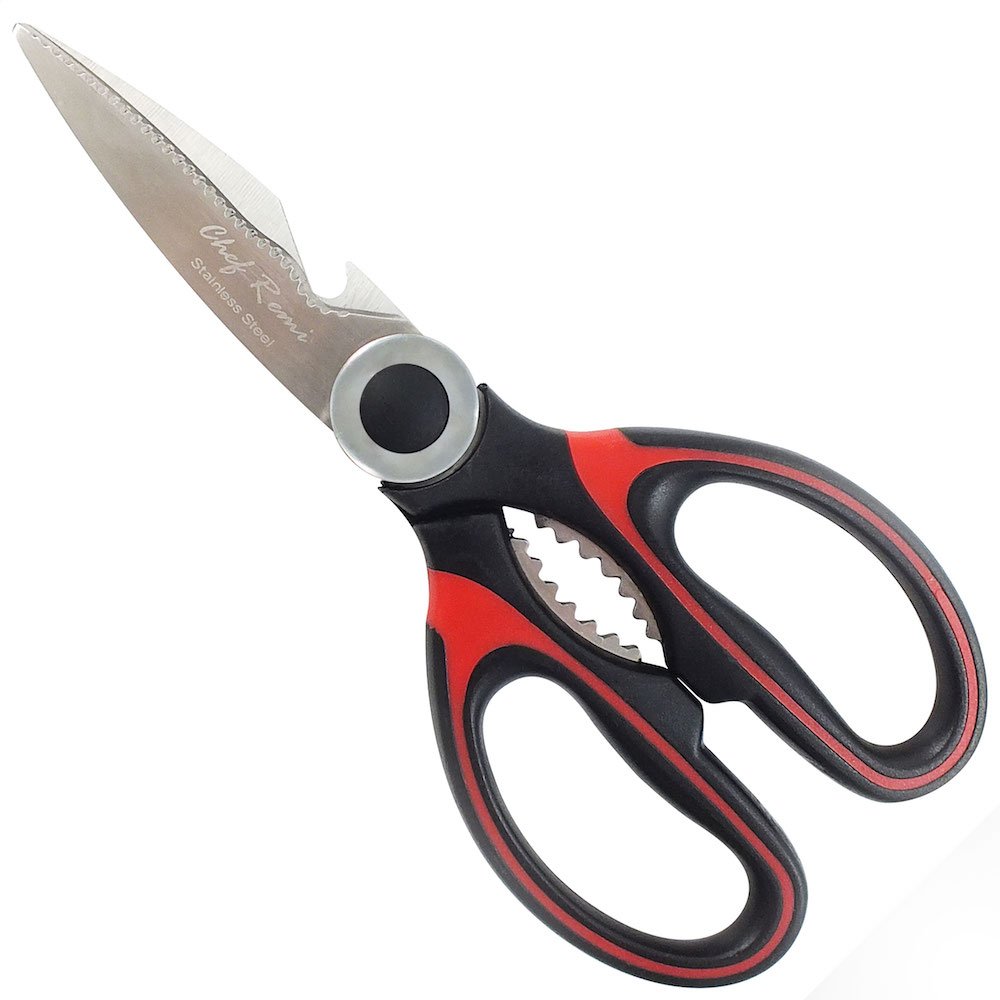 Take apart kitchen shears are highly recommended for the simple fact that you can clean them much better than shears that don’t come apart.

Because you are handling all sorts of different foods and because your shears will be touching other utensils in a draw or crock, it is highly recommended that you purchase a pair that come apart. 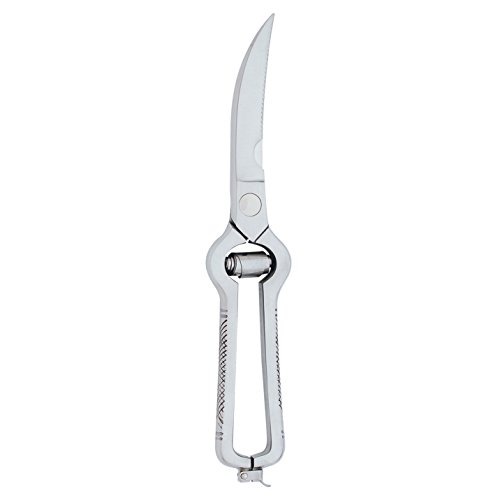 So what is the difference between a good pair of heavy duty kitchen shears and a pair of poultry shears?

Well, the design of the blades for starters.

Poultry shears have a curve, almost a crescent shape, to the bottom lip. Also they usually disassemble for safe cleaning. You will use them for things like removing the back bone from poultry and cracking through rib attachments so the shape of the scissor is helpful. Poultry shears

If you’re looking for the best-selling and most popular heavy duty kitchen shears, check this page on Amazon (updated daily).

After having done all the research and to sum it all up, here are the top 5 heavy duty kitchen shears:

Need the best price? Check this sale and deals page on Amazon.

How to Sharpen Kitchen Shears

Other Posts of Interest

This post may contain affiliate links for products I recommend. If you click a link and buy something I may receive some compensation. This does not change the price you would pay.